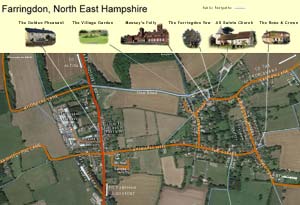 Farringdon is a picturesque village situated in the North East Hampshire countryside with a many attractive cottages, Massey's Folly (not open to the public) towers over Church Road, a massive brick construction built by over a period of around thirty years by three men, under the supervision of the eccentric Rev. Thomas Massey,Vicar of Farringdon from 1857 to 1919.

Close by the Folly, All Saints Church was the centre of Village life nearly 800 years before Massey arrived on the scene and Gilbert White, who lived in the neighbouring Parish of Selborne was Curate at Farringdon for over 20 years, from from 1761 to 1785.

Farringdon is attractive and peaceful place and is ideally situated as a base to explore the beautiful countryside and villages in this corner of Hampshire.(click on Farringdon aerial view to enlarge)

There are many pleasant walks in and around the village, many of which, to the delight of the casual walker, pass by some of the local pubs and cafes offering a source of refreshment en route.

To the north of Farringdon is the neighbouring village of Chawton, the home of Jane Austen where she wrote and revised the stories that have endured and increased in popularity over 100 years.

The novels have been the inspiration for countless television and films since they were written almost 100 years ago in the house in Chawton where she lived with her siter Cassandra.

You can follow in Jane's footsteps along the footpath that runs from The Church green to Chawton, a path she followed to visit friends in Farringdon. The house where Jane lived is now a museum and is open to the public, for more details, opening times etc vist the website.

Bordering Farringdon on the south west, the village of Selborne, which can also be reached by a pleasant walk over the hangers from Farringdon, or by a short drive. In common with many other villages in this part of Hampshire Selborne is an attractive village in it's own right, although the traffic through the High Street at peak times can be a little disconcerting but it is The Wakes home of 17th century naturalist Gilbert White, that draws people to Selborne.

More information on the Market Town of Alton, places to visit and local attractions is available from the Alton Events web site and the East Hampshire Tourism Pages